BECOME THE FRIEND OF BHAGAVAN 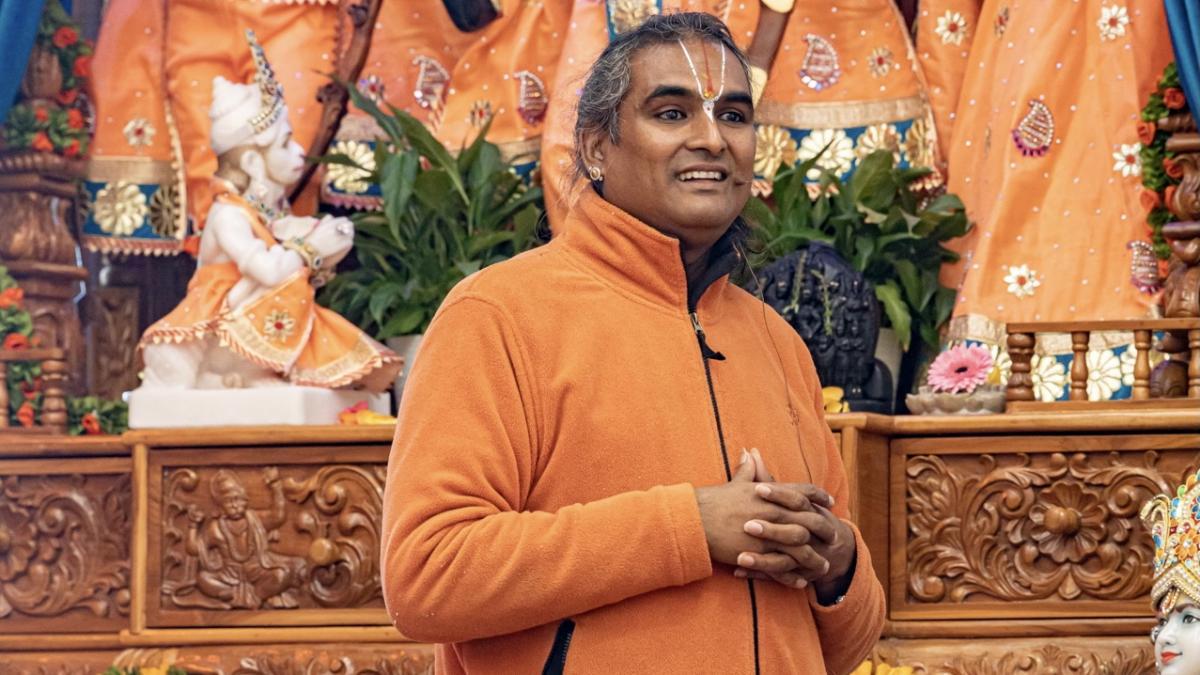 Jai Sri Ram! Jai Hanuman! So, now – one week ago we celebrated Ram Navami, the birthday of Lord Rama and we have seen in the Ramacharitamanas how Bhagavan Himself, Sriman Narayana, when it was time for Him to descend, He gave the order to all the Devas to incarnate on Earth. He said, ‘I will be incarnating through the prayer of Kashyapa and his wife. I will fulfil their wish, I will incarnate as four sons. They have been born as Dasharatha and Kaushalya, and I will be born with three brothers.’ And He ordered all of them to manifest themselves also.

When Bhagavan incarnates on Earth, it’s not something that happens often. And that proximity to serve Him, that’s what all the Devas, all the living, individual souls long for. We can serve Bhagavan in many ways but when He manifests Himself when He descends, He allows the Devas to serve Him also. Today we are celebrating Hanuman Jayanti. Here is one of the most beautiful deities of Hanumanji, look how sweet he is looking at Sri Rama, how sweet his face is. There is this love.

You know, Hanumanji is the most prominent deity which is worshipped. Every corner, every street in India has a Hanuman temple. In Mauritius, every Hindu house has a small temple for Hanumanji outside. With Hanumanji, there are always two flags. You people who have been in Mauritius, you have seen. They symbolise the victory that he holds upon. But above all is his devotion, his surrender, his love that he has for Sri Rama. We ask ourselves who is this Hanuman?

We all know that he is an incarnation of Lord Shiva. He is the blessing of Lord Shiva to Keshari and Anjana. In the love that he has, even being Lord Shiva himself, said, ‘Okay, I will become a servant of that Supreme Lord’. Lord Shiva is worshipped by all, but yet when we look at Ramacharitamanas, we see how much devotion Lord Shiva has for Sri Rama taking the aspect of a devotee to serve his beloved Lord. That shows us really what is the most important thing in life. The most important thing in life is the service that we are rendering. Hanumanji stands for that service above all. Throughout his life – well he is still alive – he has shown that service he has for the Name of Sri Rama, for the bhaktas who have come to him. Whatever they have asked for he has given that.  Very often we people look and say, ‘Oh, you are like a monkey’, meaning, ‘look you are an animal.’ Here Bhagavan said, ‘No, everybody can become My friend irrespective of who you are.’ He asked the Devas, ‘You become My friends.’ But how you become the friend of Bhagavan is only through devotion. Only when there is this love and longing for Him, then you can be dear and close to Him.

In the Bhagavatam, Canto 5, Chapter 19, Verse 7 Hanumanji said, ‘We are not born in an eloquent family – we are not born in an aristocratic family or noble family. We don’t have name, fame, we don’t have wealth, we are not eloquent, we are not very powerful, we are not very strong, we are not beautiful, but yet the merciful Lord has made us His friends. We don’t possess all these qualities. We are forest dwellers, we are jumping from tree to tree, but yet He has made us dear to Him.’ When we see this verse from the Bhagavatam, we see that Bhagavan doesn’t look at what we have on the outside. Very often people have their mind so focused only on the outside that they forget their inside. They base their spirituality only on their knowledge. Here Bhagavan said in the Bhagavatam itself, it’s not the knowledge. We are not very educated, we are from the forest, but yet He has seen something deep inside of us, that love. Who will understand that?

Like I was saying, there were for sure many people but yet He chose them to be dear to Him. Forget about them being the incarnations of the Devas. That love relationship that Bhagavan has for the devotees, and the devotee’s love for Bhagavan, that nobody could understand. Even if they try to comprehend that with the mind they will fail to comprehend it because only Bhagavan knows what the relationship with His devotees is. Like that you will see so many. Hanumanji is one of the prominent figures which is worshipped by all. For whatever people ask, they will worship Hanuman. But it’s not just to fulfil one’s wish. Hanumanji is there to make each one become like Him. That’s why Sri Rama has said, ‘You stay eternally here and look after My devotees.’

You know, when I was young – I told this story many times – at the beginning, I was 15, 16, I don’t remember, I had a dream. I was walking on the road, a path, and it was dark everywhere, but the path was very bright. And as I was walking, there were left, right some demons trying to pull me. So, when the hand was coming from the left, for sure I was running to the right side, and like that. But then behind there was a voice, when I looked behind there was this big Hanuman standing with gada in his hand. What he was doing, he was just pushing all these demons, beating them up with his gada and he said, ‘You carry on walking, I am always behind you.’

And this is how Hanumanji is, you know. To those who surrender to the Feet of the Lord, Hanuman will give them the strength, will be there always to protect them. Never think that you are alone because it is said that the moment you chant the Name of Rama, Hanuman is not far away.

WATCH THE FULL SATSANG HERE
We use cookies (also from third parties) to offer you the best possible online experience and to adapt content to your interests. By clicking on “Accept all” you consent to the storage and reading of information on your device. You also consent to the further processing of the collected and read personal data and their possible transfer outside the European Union, for example the USA. For detailed information about the use and management of cookies, please click on “Customize”. By clicking on “Forbid cookies” you reject the use of cookies that require consent.
| Privacy Policy
Cookie settingsACCEPTACCEPT ALLREJECT ALL
Manage cookies

This website uses cookies to improve your experience while you navigate through the website. Out of these cookies, the cookies that are categorized as necessary are stored on your browser as they are essential for the working of basic functionalities of the website. We also use third-party cookies that help us analyze and understand how you use this website. These cookies will be stored in your browser only with your consent. You also have the option to opt-out of these cookies. But opting out of some of these cookies may have an effect on your browsing experience.
Necessary Always Enabled
Necessary cookies are absolutely essential for the website to function properly. These cookies ensure basic functionalities and security features of the website, anonymously.
Functional
Functional cookies help to perform certain functionalities like sharing the content of the website on social media platforms, collect feedbacks, and other third-party features.
Analytics
Analytical cookies are used to understand how visitors interact with the website. These cookies help provide information on metrics the number of visitors, bounce rate, traffic source, etc.
Advertisement
Advertisement cookies are used to provide visitors with relevant ads and marketing campaigns. These cookies track visitors across websites and collect information to provide customized ads.
Others
Other uncategorized cookies are those that are being analyzed and have not been classified into a category as yet.
Powered by